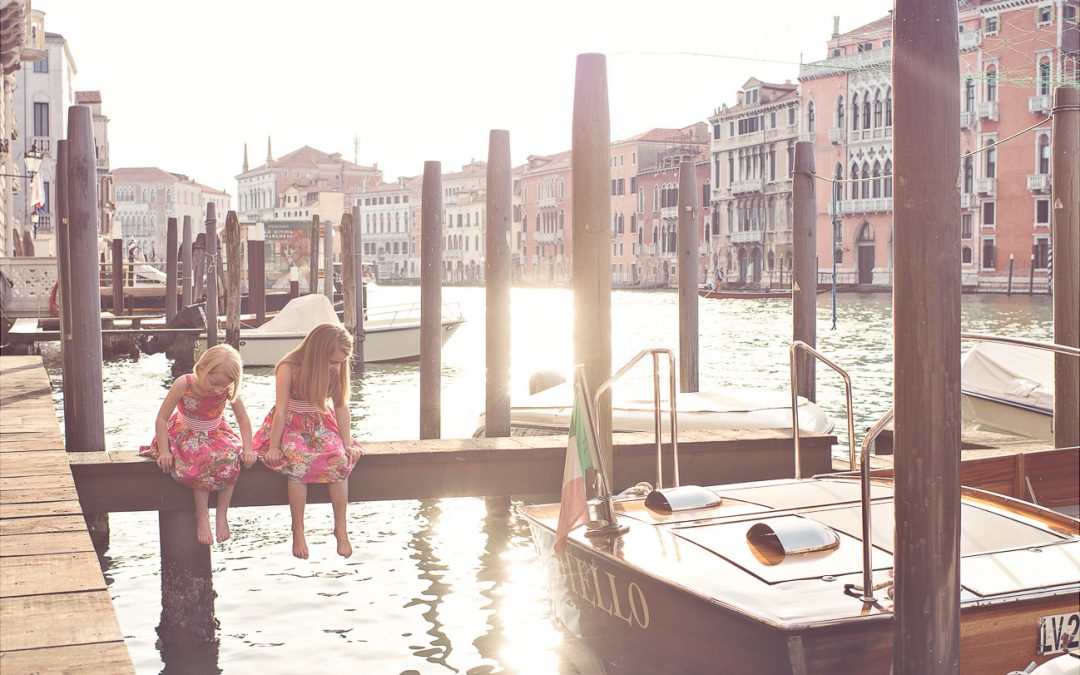 One of the things I most love about being a professional photographer is that there is no typical week or monthly cycle. Of course this can be daunting if you have been fully employed and make the jump to the world of freelance but generally it means that you learn to be open to suggestions. At the beginning of April I was chatting on email to a locally based client about a lifestyle shoot with her children. We were toing and froing about dates and trying to find something that would work around both of our travel commitments when she made a throw away comment about how nice it would be to do the shoot in Venice.

So I posed the question – ‘why can’t we do the shoot in Venice?’. As a photographer I am hugely inspired by location – the very reason why I could never be studio based – and I have always been prepared to venture further afield for a great backdrop. The dates lined up nicely because I was already away in with work in Estonia and the client just had to organise the flight down to Venice and then back to London. When you are given an opportunity like this you always want to do well and deliver a great set of images.

The forecast hadn’t looked brilliant but actually turned out to be the perfect temperature with blue skies and a beautiful quality of light. I had established in advance that the client wanted a mixture of timeless, classical portraiture with some more relaxed location work and for the focus to be largely on the children. When I arrived at their apartment it was no different from any other shoot – introductions mixed in with an immediate scan of the interior to see what offered potential for me visually. We also chatted about wardrobe options and picked out a few outfits that would work. The girls were adorable and at 6 and 4 were a wonderful age to photograph.

A few years ago I categorised light into three ‘types’ and have endeavoured to deliver a mixture of them across all shoots – whether portraiture, weddings or boudoir. It really helps me to focus and make decisions with confidence and at speed. With every portrait shoot I make sure that I deliver the ‘safe’ headshots – utilising a low contrast, frontal light source. This is very easy to achieve indoors with window light and to be found on location with top shade.

Once I know those are ‘in the bag’ I seek out more creative lighting opportunities with side light and back light. It’s generally much easier to find and work with side light indoors – there is a wonderful quote by Francis Bacon that sums up what you need to find: ‘In order for the light to shine so brightly the darkness must be present’. In the apartment I had noticed a beautiful antique dresser and mirror and suggested that we incorporate it in the pictures. It was situated in an area where I could control the amount of light in the room by closing most of the shutters. Once the parents were in agreement we needed to remove some glassware until we were just left with two candelabra. The best place for some internal family portraits also utilised gentle side light which meant I had to be quite careful about ensuring everyone was well lit.

We did of course venture out into the streets but it is difficult to avoid the throngs of tourists. I needed to try and get a shot which was typical of Venice and not just Italy so we used the Grand Canal and features like jetties, water doors and bridges. At the end of the shoot we all had a hug and I wandered off down another beautiful alley in search of the perfect bar to celebrate with a glass of Prosecco and take a little time out to watch the world float by.

Once again we took some behind the scenes footage so have a look at the shoot in action: